I thought I’d share my sermon for tomorrow morning at Ampfield – feast day of St Clare of Assisi:

I don’t know what you think about saints, but I have to confess that for me, growing up in a Baptist church, I regarded saints as some peculiar oddity of the Catholic Church, and something I didn’t really get. Saints like St John and St Mark, OK, they were the apostles, but all these other Catholic saints (and to date there are about 10,000 of them) just confused me.

However, the last couple of months have forced me to think a little more. Firstly, my college placement was at Westminster Abbey. At the heart of the Abbey (behind the High Altar) is the shrine of St Edward the Confessor. Many pilgrims come specifically to visit and pray at this shrine.

Then I went on retreat and the theme was St Clare of Assisi, and today is her feast day.

So what do we associate with St Clare? If pushed, a month or so ago, I could have told you that she was a friend of St Francis, and that she had started the Poor Clares convents, but not a lot else.

So who was this person, and why does her popularity continue today? I have to admit up front, that I have been really inspired by this incredible, interesting, dynamic woman.

Clare lived in the thirteenth century (around the time of the Crusades, and the signing of the Magna Carta) She grew up an intelligent, devout girl in a well-to-do family in Assisi. She would have been a strong asset to her family, and the obvious next step would be a good marriage. Clare showed her strength and independence early, and pushed to wait until she was 18.

When she was 18, in the lead up to Easter, Clare heard Francis of Assisi preaching and his words set her heart on fire with love for God. She decided to dedicate her whole life to God. On Palm Sunday, she went to church with her family as usual, wearing her fine robes. She had already decided that she would go and join Francis and the brothers, and had made secret arrangements.

She knew that her family would not like her decision, and that they would try and prevent it. So that night, she secretly left her family home. Once everyone else was asleep, she cleared a disused passageway and opened a gate (normally used for taking out the dead), and went to the church to find Francis and join his group. While his brothers held torches, Francis cut off her hair and gave her the tonsure, as a sign of penance.

This was an incredibly bold set of actions.

Just like in today’s Hebrews reading: “By faith Abraham obeyed when he was called to set out for a place that he was to receive as an inheritance; and he set out, not knowing where he was going.”
And in the Luke reading: “Do not be afraid, little flock, for it is your Father’s good pleasure to give you the kingdom. Sell your possessions, and give alms.”

Clare heard God’s call and responded with her entire being, not knowing what would happen. She turned her back on her entire upbringing and the future that would have been expected for her. She left behind her wealth, her beautiful clothes, her comfortable home, even her hair.

This was a totally scandalous event. If this happened today, it would probably feature in the Assisi version of Hello magazine!

Imagine if you were her family? What would you do?

Probably the same thing that her family did – they went mad, they went after her, they wanted her to come home, they pleaded and coaxed for many days. After all, their intelligent daughter has gone off chasing after an itinerant preacher and his rabble of followers. But when they saw her with the tonsure, they knew this was her path, and that she had decided to totally follow God.

Now imagine if you were Clare? If you heard that call to follow God, would you be prepared to act so wholeheartedly? I don’t know about you, but I know for me it’s easy to add in lots of questions, to worry about security and safety, to want to make sure all the family will be OK, to keep everyone happy, to plan… and to procrastinate, to put it off, to want a bit more reassurance…

In the Genesis reading we heard “Do not be afraid, Abram, I am your shield; your reward shall be very great.”

Although we don’t know that Clare had the same promise, she did have a similar outcome. I’m sure she could not have anticipated what would happen in the next 40 years of her life, and certainly wouldn’t have imagined that 800 years later we would still be talking about her.

For Clare, it is about “the choice of poverty… this is a decision to bring all we have and are into line with God’s values, which are values of heart and spirit rather than power and prestige, values of giving rather than having. …[very often] Clare focuses on Christ in the crib and on the cross, because those were the moments when that value system of the heart was most dramatically portrayed” (This Living Mirror, p49)

This poverty is maybe a little different to our common understanding of poverty, which is usually as a result of injustice, exploitation or drought. For Clare this is a choice for “totally self-giving generosity” (Living the Mirror, p58), for self-emptying allowing a total focus on Christ, and awareness and openness to encountering Christ in others too.

I think quite often, our understanding of our Christian faith can be about the things we need to do for God (and then perhaps feeling guilty about the things we haven’t done). Whereas for Clare, it seems to be more about her total focus on Christ, and then the transformation that has in her.

In other words, it’s not about what she can do for God, but about what God then does in her – a very different focus – “it is participation in the creativity of God.” (This Living Mirror, p51)

Clare frequently uses the imagery of a mirror, of focusing on Christ in the mirror. She also talks of how her life, and others can be a mirror for others, so that they can see God’s love reflected to them.

Clare established a convent at San Damiano, and many women were attracted to join her (including some of her family and friends). “Clare was the first woman in the Church’s history who composed a written Rule, submitted for the Pope’s approval.” (Benedict XVI – audience)

She was also strong enough to challenge the Pope, and insist on the total rule of poverty. She had to get special permission from him for the order not to be able to have any material wealth (even though the church wanted to give her lands to use and other assets.) In Clare’s lifetime, many new communities were founded in this order, because her example and the sisters that joined her, drew many others to a life of prayer and penitence, and total focus and dedication to following Christ.

As you can probably tell, I have been really inspired by St Clare. She may have lived 800 years ago, but her courage and her faith still shine today, and remind us of how it really is possible to heed the words from our readings “Do not be afraid!” And I’ve realised that the lives of the saints, and many other people, can be inspirations for us, inviting us to follow their example and encounter Christ ourselves.

I will end with a poem written by a lady Yvonne, on the retreat I went on, out of the work we did together on St Clare.

Collage of St Clare, that we made on retreat. 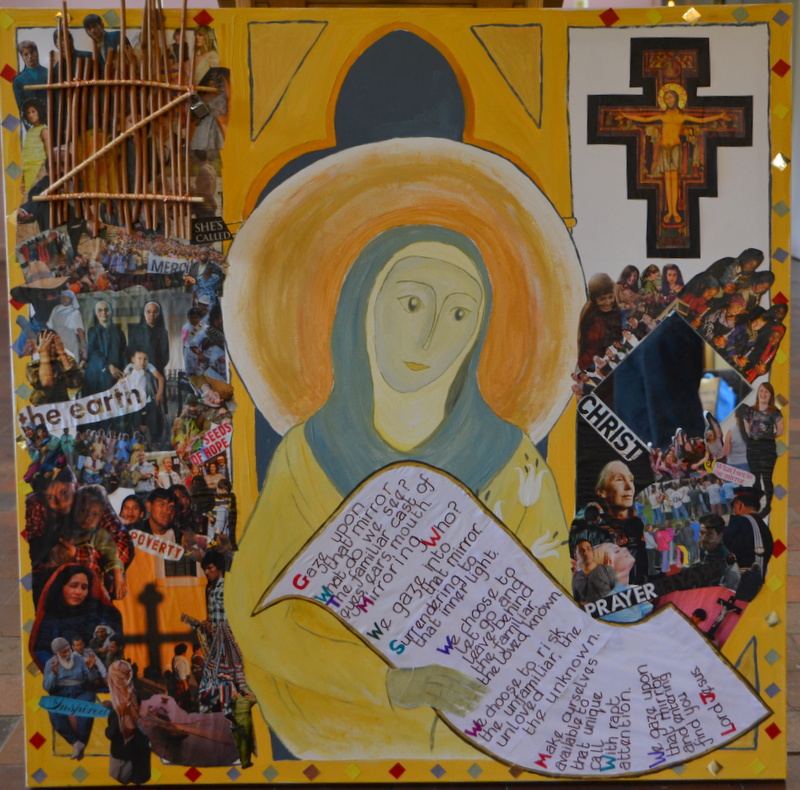 2 thoughts on “St Clare of Assisi”