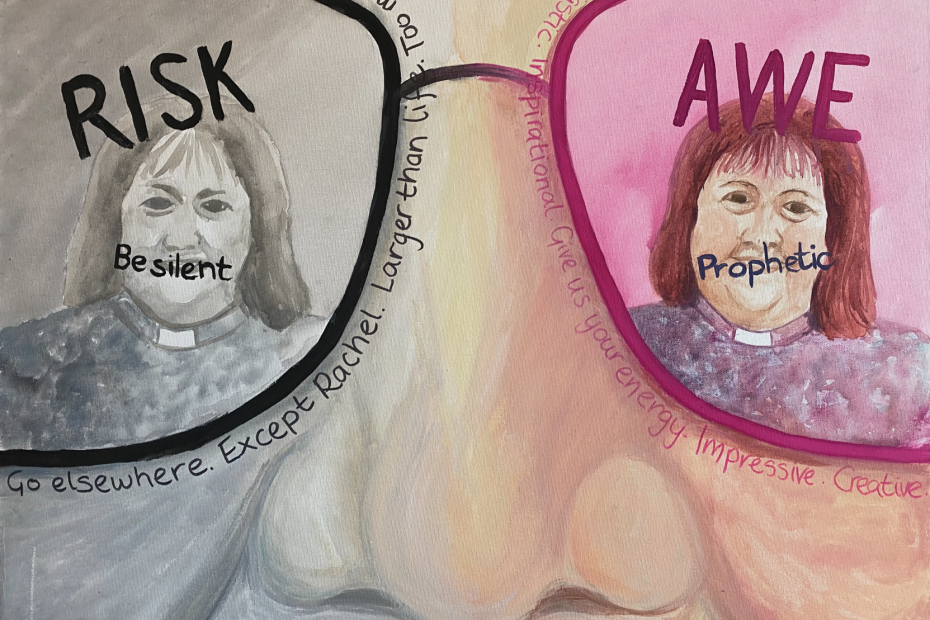 During Autumn 2020, preparing for the Disability Conference, Revd Jonathan Evens led an art workshop called Windows on the World. This was during the first year of pandemic, lockdowns and many of us had been shielding. Participants were encouraged to take photographs, make drawings paintings, poems and prose to describe what we see and the window we look through.

As I took part in the workshop, I had a really strong image in my mind, to represent the windows, the lenses through which I seemed to be seen by others.

In the wake of 2017, having taken antidepressants, which triggered mania, and subsequently being diagnosed with Autism, ADHD and Bipolar I have faced a huge variety of reactions from others, as well as my own journey processing what these all mean for me.

The medical model of disability is deeply embedded throughout our society, ableism runs strong. For many, that meant I was viewed through the lens of disorder (many disorders).

For me, that has included other clergy wanting to pray for demons to be released when I was most unwell with medication. Once I was diagnosed with ADHD and autism – the most life-giving diagnoses, helping me to understand who I have always been – there were clergy that told me that in eternal life, there would be me without any of these conditions.

As these diagnoses came out in curacy, my curacy had to be extended whilst I recovered. But there were also questions of whether it was possible to be a priest with one of my diagnoses, let alone all of them. People were fearful of me, they were fearful of what these diagnoses meant. Some questioned whether I should ever have been ordained, and others described me as an anomaly as a priest.

“3. No person shall be admitted into holy orders who is suffering, or who has suffered, from any physical or mental infirmity which in the opinion of the bishop will prevent him from ministering the word and sacraments or from performing the other duties of the minister’s office.”

Some suggested that I take up needlework instead.

I am fortunate to have friends and supporters that encouraged me, that helped me to see myself, to see God at work within me. For a bishop and archdeacon that had the courage to sign me off curacy, and license me to the post I’m in now as priest in Pennington.

And yet others fears continued. I have been working feeling as if RISK has been tattooed on my forehead. I’ve been told that I’m larger than life, that I should look to go elsewhere, that I’m too much, that it would be better if I wasn’t open about my diagnoses, that I should try and be more like others, and that if I can’t do that, it would be better if I was silent.

But the same life, the same events, the same things that I have done, yield completely different reactions from others. They describe me as inspirational, impressive, enthusiastic, encouraging, and life-giving for others. They see my strengths and gifts, my creativity and energy, my enthusiasm and connections, and they respond in awe.

When Jonathan asked us to paint our windows on the world, for me, I wanted the painting to represent something of these two windows, these lenses.

As I sat with the painting, it was too much to bear. This was my experience, and it hurt. Both lenses picture some sort of disconnect with me and others. Those that react to me through the risk lens, seem unable to see the strengths and the gifts, they respond from fear. Those that react with awe, seem unable to see my vulnerabilities, the blend of challenges that I have too.

This painting represents something of those parallel lives, a reminder of the dangers of simplification, of categorising… and perhaps I’ll be able to start to see the lenses, the blinkers I have put on myself too.