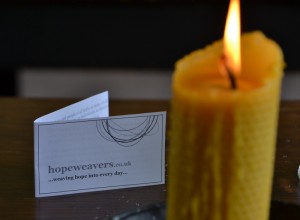 A few weeks ago I went on a retreat at Hilfield Friary, led by Jacqui Lea from Hopeweavers, inspired by St Clare of Assisi. It was perfectly timed; I handed in my last second year assignment at college on my way to the retreat. I have to admit I was rather frazzled as I arrived, it has been a pretty intense couple of years with work, college, family, life in general all happening at the same time. On the first evening someone else on the retreat talked about the spiral nature of our journeys, and how we often come back to things from a new angle. This is an image that resonated with me, and one that I’ve explored in the past too; but it sort of sank into my head on that first night, and I decided to continue to explore it in the morning.

In the morning it was suggested that we might like to do a weaving. Having done some weaving previously, I decided to continue playing with the spiral picture in my head, and try and create a 3D version of it. My intention was then to add some string to it, and possibly weave into it, and hopefully incorporate some mirror somewhere. In my head, this seemed like a fairly straightforward project, and something I could achieve in the morning… 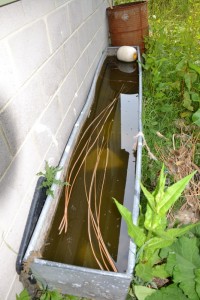 I had a look around and found some basket weaving willow in the art barn that could make the spiral shape and some bits of tree branch to make the base into which I could fix the spiral. All looking good… Geoff kindly helped me create a sturdy base out of a slice of the large branch, and attach a smaller branch into the centre as the ‘trunk’. I was able to use a branch that still had leaves on the top. For me this represented Christ, and also the imagery of the tree of life.

I’d not worked with basket weaving willow before. It turns out you have to soak it in water for an hour or two before it is soft enough to shape it without it breaking. Fortunately there was a large trough, so the willow went into the trough… and I had to wait a while… (For those of you that know me, you’ll know I’m not very good at waiting, I like to just get on with things.) 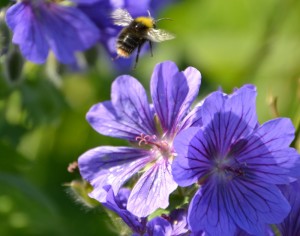 So I waited for it to soak, and spent some time outside, watching the bees, and soaking in the beautiful place. (And it was OK, because after lunch I would be able to get on with it again…)

At this point, I also slowly realised that it had taken an hour or two for the willow to get soft enough to be pliable and pulled into shape. Having got it into shape, it was then going to take several more hours to dry again, so that the shape would be robust enough to start adding further string to it. Hmmm… more waiting.

At this point I started to spot the irony. This spiral form was intended to be about my formational journey, and how that journey spirals around my image of Christ. As I contemplate Christ and meditate on him, I seek to be transformed. And yet this formational journey isn’t instant. There is no fast-track path on my journey. It involves a lot of waiting, and working through things, and revisiting things. Many years ago, I naively thought that as you worked through an ‘issue’, that would be it; and in the future you would just encounter new / different issues. As I grow up, I realise that actually the things that I have worked on in the past, the issues that I need to address are part of who I am. And yes, although I have worked on them, as I journey forwards, I make my way round the spiral and sometimes return to a similar issue, but from a slightly new perspective. And my formational journey, much like the spiral I was trying to create, involves much tying & retying of string, adjusting of tension, trying to move forward a bit at a time, trying to be the shape I think I am made to be. 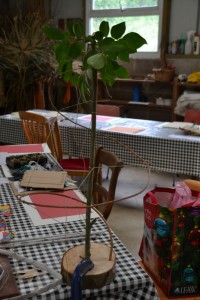 Ah, I think… clearly I’ve found the lesson I needed to learn from constructing this spiral… yes, I’m going to have to do some actual waiting, while I make my formational spiral that is about waiting, and revisiting and slowly learning and being transformed. OK… lesson learned, now I can just get on and tie the string into the shape I had in mind and finish the sculpture…

Well, it turns out, that even once the willow is dry, there is still quite a lot of give and flexibility in it. Which means that attaching the string in the ‘Barbara Hepworth-esque’ design that I had in mind was going to be a test of my patience. Much tying, and retying of string later, and I had finally managed to create the shape I had in mind. For me it was important that the strings connected the lower (earlier) parts of the spiral (journey) to those higher up; in the way that our current journey is connected to the journey that we have been on. And it was important to me that those strings all touched the central ‘Christ-tree’, and that their direction was slightly changed / shaped/ transformed by that encounter. Several hours later, much muttering, and much tying and retying of string, I had managed to get the form in place. 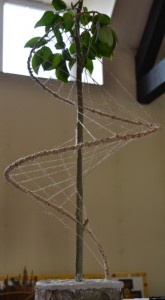 OK… surely that’s enough waiting now… surely I can just get on and complete this spiral sculpture… (by now it’s nearly the end of the second full day, and we go home on the third day!)

The final thing I wanted to incorporate into this image was some mirror. The retreat itself was entitled ‘Gaze Upon That Mirror’, and mirror is an image that Clare had used.

“Place your mind before the mirror of eternity!

Place your soul in the brilliance of glory!

Place your heart in the figure of the divine substance and,

through contemplation, transform your entire being

into the image of the Godhead Itself…”

(St Clare of Assisi 1238, the third letter to Agnes of Prague)

With the sculpture I wanted to place some mirror on the base, so that it was possible to view it from different angles. In particular I wanted to be able to look in the mirror and see the central tree / godhead image reflected. From some directions, this would involve looking back through the spiral, looking through the string, looking back through my journey and seeing Christ’s transforming love at work through my earlier journey. But it’s also possible to look in the mirror and focus on the leaves above, on the central trunk, and to see where the spiral might be going, as the journey continues; and to focus on Christ in that mirror. 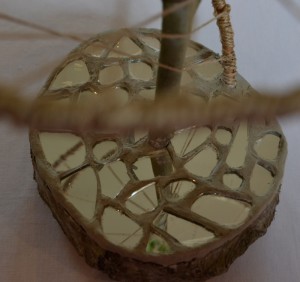 The materials that I found to use for this part of the sculpture were some broken pieces of mirror tile, and some air drying clay. I was able to mix the clay with some PVA glue, to help the tiles stick to the piece of wood underneath. As I put the mirror tiles into the wet clay, and assembled it, the mirror pieces became covered in a layer of clay and glue. Once I’d got all the pieces in place, I tried to clean the mirror pieces. It turns out my waiting wasn’t over yet. As I tried to clean the mirrors, all I did was keep smearing more wet gluey clay back over the mirrors.

I needed to leave the clay to dry overnight, and it was only on the very last morning that I was able to clean each mirror piece individually, so that they were able to reflect clearly. 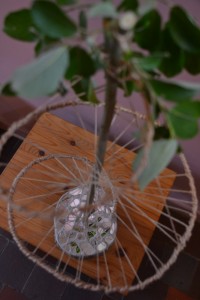 So finally, as the retreat drew to a close, I finished my ‘first morning’s spiral sculpture’, exploring my formational journey. I hadn’t expected the process itself to be so formational, as I faced up to my impatience, my desire to move forward and resolve things, and my frustrations at revisiting earlier parts of the journey.

Creating this spiral, meditating on it during construction and praying with it now I’m home has also started to give me the confidence to keep finding a way forward. I know there are aspects of my journey that I have visited in the past that I need to visit again. The additional stresses of juggling work, college and family have helped me to realise that our journeys are never complete, and that issues I’ve explored before need to be looked at again, albeit from a different angle, a new twist of the spiral. I’m optimistic though, reflecting on my journey thus far, that contemplation does indeed lead to transformation, and that I just need to have the courage to keep exploring and following that journey. 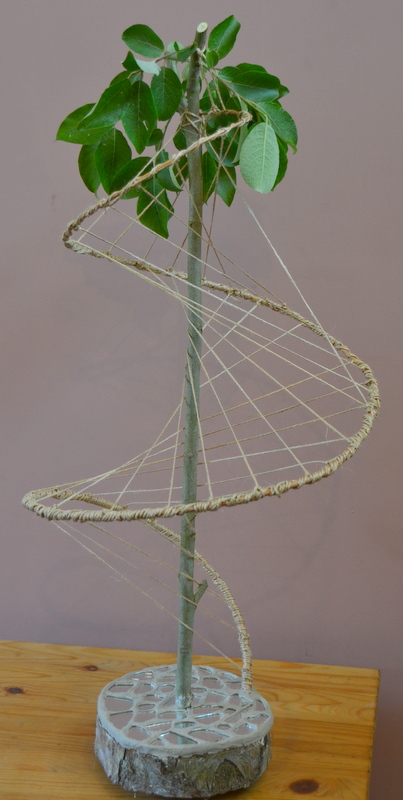